I love my home town and especially its rivers, despite the pollution.


There's no glossing over the sordid history and the general decline of the 58th most populated city in the country.  There's a lot of water in the valley and it's not enough to wash away the decay.  Across the river at Cahokia you can stand on a 1200 year old pile of earth amassed by people who seem to have had their own issues with civic improvement.  From there you can view a more recent attempt at urban renewal: the silver ribbon of the Gateway Arch gleams hopefully against the hollow warehouses and frumpy skyline of downtown St. Louis.

But let's not get too post-apocalyptic.  There are still embers glowing in the bowels of this once great city.  There are original gurgles, hisses and shouts of life beyond the cardboard riverboat casinos and the bargain floors at Costco.

One of many slithering signals of vibrancy occupies an abandoned discount store on Olive just east of 170.  Seafood City is Chinatown condensed into a building the size of a pre-Superstore Walmart.  Odiferous offal, whole pork bellies in butcher cases, an aisle and a half of dried noodles alone, a glut of soy sauces (light, sweet, superior dark), twenty brands of shaoxing wine, black vinegars, vats of pickled cabbage (help yourself), stinky tofu, heaps of healthy gai lan, and, last but not least, truckloads of fishy creatures, some dried, some frozen, and a many still breathing and flopping.  Such a place may not excite someone from the Bay Area or New York.  But I visited three times and sent a 30 pound package of supplies to myself in Montana.  We just can't get this kind of thing here.

Whence came this mass of gilled beings?  I did not ask.  On beds of ice and crowded into tanks, some looked well (I bought a couple of pounds of firm shrimp for shrimp n' grits) and some looked rough.  This was my first attempt at the classic southern dish and the shrimp were quite tasty and sweet.  The pencil cobb grits proved a challenge.  They weren't quite sandy, but I couldn't get them as creamy as I would have liked. 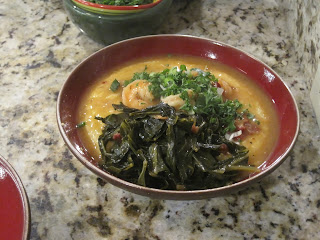 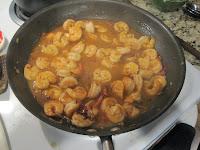 A pot of smothered collards didn't go over so well with the family.  I may have been too liberal with the cider vinegar.  I like my greens sour.  Collards aren't for everyone and I should have plated them separately.

For brunch one day, we whipped up a frittata with bacon, cheese and Chinese broccoli. 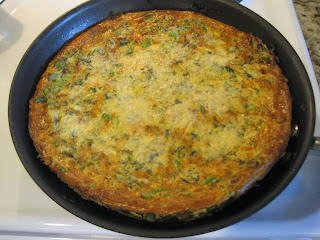 And when everyone was downing heavy toasts and hams and eggs for breakfast, I sought gastrointestinal refuge in congee made from Carolina Gold rice grits with a fried egg, scallions and a pile of crunchy radish kim chee.  Thanks Seafood City!

My brother and I took the family for late morning dim sum at Lu Lu Seafood just down the street from the City.  Particularly memorable were the fried pancakes, the pork dumplings and a shrimp dumpling crowded with scallions.  The meal was worthy and I can see a stop at Lu Lu becoming an integral part of all future St. Louis visits.

One evening, my pal Country Rib Jeff needed a lift to the local Shop n' Save for groceries and I was happy to oblige.  I killed time in the meat aisle while he grabbed his cereal, peanut butter and budget pork cuts.  I was intrigued by the ingredients in two processed meat products.  A beef chorizo listed salivary glands and lymph nodes as its foundational constituents.  Maybe every processed meat found on the refrigerated racks of America's supermarkets has similar ingredients, but how often do you see that advertised? 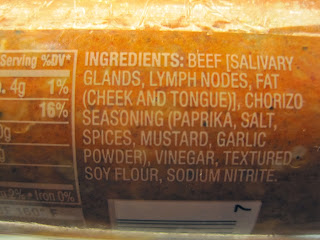 Though I'm sure it's tasty, I did not have the guts to buy a pail of this locally made meat spread: 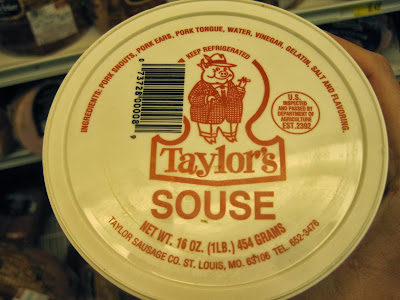 Instead, I brought home a hunk of smoked pig jowl which we happily sawed on all week.

I have always found it somewhat symbolic that, when I moved away from home almost 20 years ago, I moved way upriver.  There's some weird comfort knowing that I could paddle a canoe, laboriously, from the Missouri headwaters in Montana across the prairies to this old rivertown.  That didn't sound so absurd 10 years ago.  These days, I'd rather fly or, if it made more sense, take the train.  All so I can have more time to eat toasted ravioli with the family and walk in these rich valleys while the barges hum.