The high art of excess

We'd walked well beyond Restaurant Au Pied de Cochon by the time we realized we were lost.  I was panicked.  We could not show up late and lose our place at table.

We'd walked right past the restaurant, apparently.  And I proceeded to walk past it again, in the grips of mounting anxiety that we were somehow in the wrong part of Montreal altogether.  I'd written down the wrong address or we had exited the subway tunnel miles from our destination.  That constant fine snow was falling and adding imperceptibly to the blue mash of slush on the sidewalks.  They don't shovel their sidewalks in Montreal, and I loved this about the city.  In Missoula, you get treated like a puppy-killer for not shoveling in front of your place after even the most insubstantial snowfall.  At 5 AM you can hear the dutiful scraping of shovels down the block.  God forbid you can't make it out until 10.  And the result of this game of "I'm a better neighbor than you"?  The fluffy snow gets honed down by the shovel blade to a few millimeters of hard packed ice.  A louge for neighbors to break their asses upon.

In Montreal, they just let it pile up.  Fuck it, it's never going to stop snowing.  What's the point?  It's snow.  People can handle it.  It builds up, hundreds of feet trudge over it and mash it to a grey-blue paste.  Sure, it's lots of work and you need boots, but at least you have traction.

It was Bee, of course, who spotted the place on our third pass.  Martin Picard's fat-soaked shrine of excess, glowing like a hearth in the miserable night.

I'm not sure where else you can get a whole pig's head roasted in duck fat with a lobster exploding out of its mouth.  Though all the plates served up at PDC tend to be over-the-top, not all are as extreme as the "pig's head for two."  A dish so outside the sphere of common sense and, dare I say, decency, begs the question:  "is this really necessary?"  I think Bee, who was not as excited as I to spend an evening at PDC, was a bit more concerned with this question at the outset.  Our experience there was so comforting and joyful that the place made believers out of us both by the end of the evening.

Of course it's not necessary, like so much in human life that comforts us in our weakness or helps us transcend the bare facticity of a "short life of trouble."  While a bowl of gruel satisfies hunger, a grilled cheese filled with black truffles and goat cheese then soaked in maple syrup and butter transforms your mouth into a vaulted expanse strewn with auroras of sweet creaminess and damp wafts of earth. 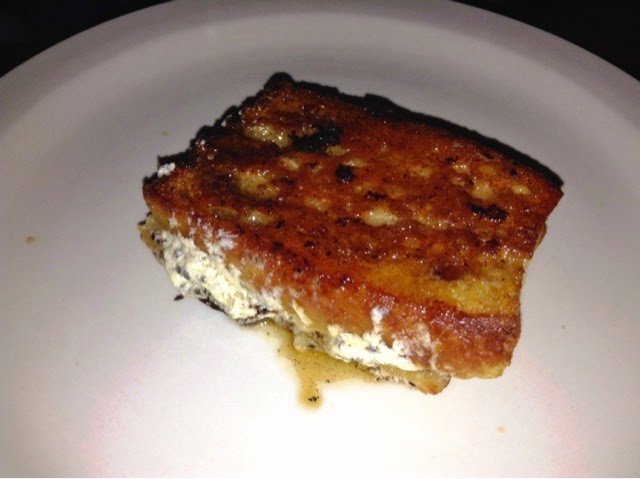 I definitely can't afford to sup like that often (even though PDC prices are quite reasonable), but every now and then it stretches one's sense of the possibilities in the kitchen and can make one a more thoughtful and inventive cook.  While a quiet room with a cushion and blank walls may do the trick when one is in need of a place for focus and devotion, an hour in Notre-Dame puts the strivings of the human heart in a whole new perspective.

In its slant toward the heavy and extreme, the food at PDC is no anomaly on the Montreal food scene.  The preposterous winter weather is a backdrop against which it is easy to see how a cuisine of such baroque proportions might have developed.  It's not just a French or English response to the harsh conditions of the frontier.  Adam Leith Gollner's fantastic essay on the history of gluttony in Quebec (Lucky Peach #11) traces the tendency to overstuff back to the indigenous people of the region and their feasts celebrating the available bounty.

In addition to our grilled cheese sandwich, we ate slices of nutty housemade prosciutto (as good as any Italian product I have tried). 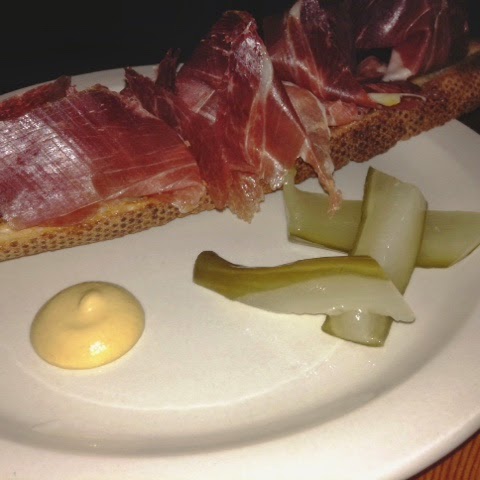 There was also a creamy pot of fresh gnocchi with sausage and, of course, the famous PDC poutine topped with lobes of silky foie gras. 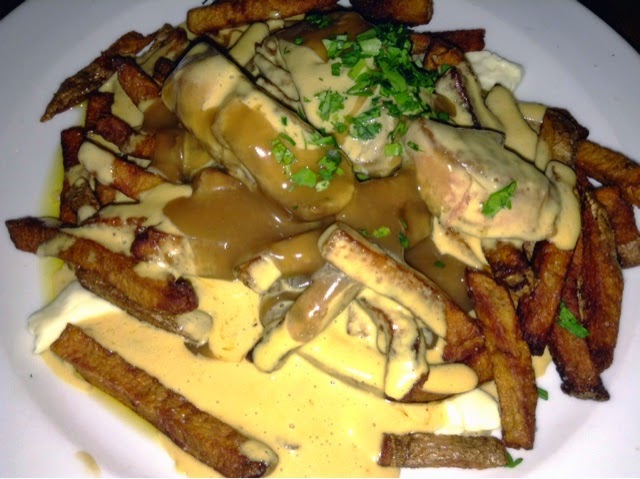 We had a couple glasses of the crisp house beer and topped everything off with coffee and small glasses of Amaro Montenegro.  The service was impeccable and kind.  One of the staff dribbled wine on a customer and immediately grabbed a bottle of whiskey and poured shots which the two drank together, a particularly tactful apology if I've ever seen one.  The place was warm, gently lit.  The staff was drinking the whole time.  Not hiding it.  The kitchen was raucous, but no one was sloppy.  Good cheer prevailed.  Even the drunk American at the bar who was quite sloppy was embraced with tolerance and warmth.  It was one of the best times I have ever had in a restaurant, more of an event than a meal.  We were full, but not sick.  We left feeling comfortable, bolstered against the cold and the long night.